As if the Polaroid 330 Land camera wasn't cool enough.  It's compact, built solid, 60's as hell, and oh yeah, it produces incredible images on the discontinued Fuji FP100C peel film.  The images are sharp, colorful, and nostalgic (by the way, don't lose all hope on this film.  The former brains over at Impossible Project are redeveloping it and is supposed to be shipping in the summer of 2019).

I purchased this camera on eBay a while back and some time after experimenting with it, I discovered it had a PC sync socket on the left side of the lens.  For those who don't know what this is, it is a small electronic socket that you connect your camera to a flash and fire a flash "in sync" when the shutter is released to expose your image with flash.  This is awesome because now I can use this camera anywhere, day or night.  No need for long exposure or blurry images because your subject cant hold still for 2 seconds or more...if it works.


I hooked up a generic flash to the camera and tried it with no film.  It fired flawlessly as I had hoped. This was encouraging.  I tried a few test shots with film and I was pretty stoked.  Now, this is a fixed aperture lens (f8.8), and the film is ISO100, so I had to use a flash meter to calculate manual flash output based on the aperture, ISO, and subject to flash distance.  This is 1966 after all and TTL was unheard of at this point.

So, if I can fire a manual flash using the sync socket, why not fire it wirelessly using a generic trigger system?  It makes perfect sense, right? Yes, it does, and it works...well!
Any flash and trigger system should be able to be used for this as long as it has the ability to be operated manually and not TTL dedicated only.

Here is my set up:
Polaroid 330 Land camera w/sync cable
Fuji manual flash (I've since used it with my Flashpoint studio strobes)
Phottix Strato trigger system (dedicated for Canon, but works manually with any flash)
Flash stand to place your flash as desired (shelf, ground, on stand, wherever)


And here is the system all hooked up...

And this is how it works:

I recently saw a post floating around on social media which depicted women of the 50's and 60's taking impromtu portraits by their Christmas trees.  They displayed a class and style of the era which we don't see anymore and of course, all shot on film...many of it instant film.  My wife saw the same post and casually suggested we try to do a photo like that this year.  I enthusiastically agreed...and I knew just how I was going to do it.

I experimented with direct flash (above) and bounced flash (both ceiling and wall to left of camera) and I think the direct flash looked best and most accurate to the era.  The hot spot in the middle with natural a vignette and hard shadows are classic.  We tried a few different poses and burned through a pack of film, but had a lot of fun and I learned a lot.  It is satisfying to have an idea, put it together, experiment, fail, try again, fail, try again using what I learned, and then have a print that exceeds expectations.


Here are a few others we did. 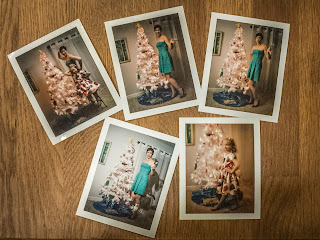 These obviously are not new ideas.  Nothing ground breaking, nothing that has not been done before. I guess the purpose of this is to never stop learning, never stop trying new things (or new to you), and always work to better yourself in whatever you do.  If you have passion for something, let it consume you sometimes. Live it and own it.