My love of the Gibson Les Paul began when my sister turned me onto Ace Frehley and Kiss in 1978 when she gave me Rock and Roll Over.  I swear I air jammed to that record with my moms tennis racquet until the vinyl grooves wore smooth.  As a kid, I always wanted a real Les Paul like Ace, but I really wouldn't pick up playing for another 8 years...and I certainly couldn't afford it.

Fast forward 13 years.  I was 21 at the time...1991.  I was out of high school and working at a local music store selling guitars.  I had spent the last 5 years teaching myself guitar by listening to greats of the time and jamming to records.  Trying to learn my favorites licks and creating something unique inside of me through music.

I had the privilege of being able to acquire a few guitars since employees had endless store credit...and I bought quite a few (only to sell them off later because I was so far in to debt to the music store when I left).  But one guitar stayed with me, and is still with me today.  I knew it was special from the moment I saw it, and this is its story...

I was working the sales floor one day in '91 and a guy came in wanting to trade a guitar in on something else.  I knew it was a Les Paul looking at the case, but I had seen and played dozens by this time, and even owned a few, so I really wasn't expecting much.  He opened the case and inside was one of the coolest Gold Top Les Pauls I had ever seen.  I'm not sure why I was so instantly in love with this guitar and had absolutely no idea what year it was, but I thought it was definitely worth trying to trade in and then maybe, selfishly, I would be able to buy it through the store.  I had no intentions for this guitar to ever make it to the showroom floor if I could help it.

So, we work out a trade in deal and he's happy.  I take the deal to the floor manager and he rejects the deal.  He wants to low ball the guy and give him hardly anything for the guitar on trade.  This could be great for me because the smaller the investment the store has, the smaller my investment will be, but inside, I know this guy is going to walk.

I present him the counter offer, and as predicted, he closes the case and walks out with the guitar of my dreams.  Panic sets in and I quickly run out to the parking lot to catch him.  I tell him I'm willing to buy the guitar off him and offer him a little more than he was going to get on trade to hopefully entice him to sell it.  He agrees.  I am over joyed.  It's going to be mine...only, I have no money...You know, because I'm a 21 year old musician and they are always broke.  Longer story short, I end up borrowing the cash and paying a little interest back to my dad (THANKS DAD!), but I get the guitar.

The guitar is still with me today.  It is the only guitar I have kept since I began buying back in 1986. Never say never, but I intend on playing it until I die. It has been with me for numerous live shows, recorded in Nashville (The Gents As-Is), and has been so special to me for the past 27 years.

Through a ton of research, I was able to identify it some years later after I bought it from that guy in the parking lot.  It is a 1982 30th Anniversary Les Paul Gold Top, serial # B 0062.  It lacks the 19th fret commemorative inlay so it was probably a "b" model, but there is no doubt as to what it is.

It is a "rare" guitar.  It's not a '59 by any means, but it's definitely special.  I have seen a few here and there on the internet for sale and they are getting about 10 times what I paid for it, but I have zero interest in selling it, it's just that cool and means so much to me.

I was talking to a friend of mine a few years back who I worked at the music store with who still works there. He told me that the guy has been in on more than one occasion to try and find me to buy his guitar back.  The music business can be cruel, but that's business, and this guitar is staying with me forever. 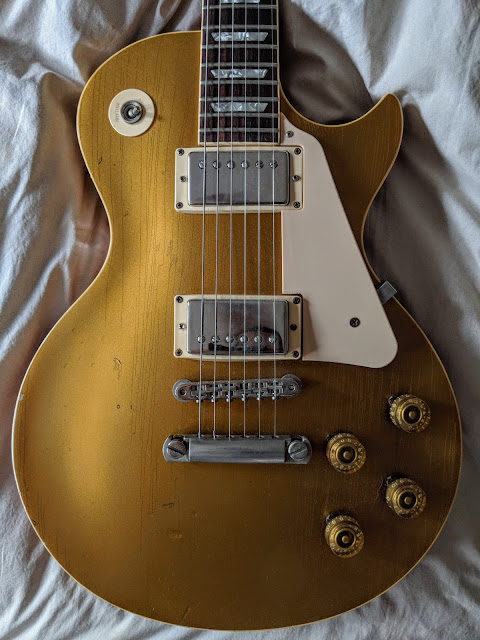