Wanted: Drummer. PA and unintentional friendship a plus. Influences include...

Sometimes, we gravitate toward someone, taking notice of things we have in common, and work to establish a bond.  Other times, it's our differences that bring us together when we least expect it.  This was one of those times.

In 2010, a good friend of mine invited me to St. Pete Beach, FL to play guitar and sing in a one time weekend band.  I knew the other guitar player and bass player as we had all grown up in the late 80's music scene and was told they had a drummer to play kit for the shows.

We put a song list together of our favorites and I spent the next couple months learning them at home and couldn't wait to get to Florida.  I had never been.  We would be playing on the Gulf of Mexico, so needless to say, I was stoked. Being a guitar player and forming certain relationships has afforded me some opportunities that I will forever be grateful.

After arriving in Florida, we all meet at the rehearsal space which was a storage shed in St. Petersburg. With PA gear, amps, drums, and five bodies, there was barely enough room to breathe.  I'm introduced to the drummer, Scott, whom I've never met or jammed with, but I just want to play.

Now, being brought up in the late 80's and early 90's rock guitar world, I require a hard hitter.  I love playing with a solid, driving drummer.  It's probably made me a less versatile musician to a fault. A few songs into rehearsal, it is clear to me that Scott is not from the same school. His playing was laid back and soft. Not that this was a bad thing, it was just not what I was used to and I found it difficult to get a vibe going.

Over the next week of daily rehearsals, I'm pretty sure I got under Scott's skin more than once asking him to hit harder and play louder, wanting more energy brought to the songs. There may have even been times when we absolutely didn't want to be in the same room with each other.  Either way, we made it through rehearsals and it was show time.

I wasn't as excited to play as I was when I first arrived.  I didn't think the energy was going to be there, and for me, it's hard to bring the song when it's lacking.  We start the set and the songs go pretty well. The crowd is good and there is a vibe happening. I'm not sure when it happened, but I look back at Scott mid song and he is completely killing it.  Playing hard, pulling off drum fills that he never brought out in rehearsal, and releasing so much energy.  The show goes great.

After the shows and during off time, Scott and I actually get to talk a little and find out that we have a lot more in common than I ever knew.  I think at some point I apologized for being a demanding prick and tell him how surprised and pleased I was with his playing and the show.  He's as cool as ever and smoking an American Spirit simply replies "Yeah, man. For sure."

Over the next few years, Scott and I kept in touch on social media and actually got to play together again in Florida.  Every time I return, I'm stoked about hanging with him.  Appreciating our differences is as important as recognizing the similarities.

In May, 2017, I returned to Florida to play a gig in Tampa. Scott wasn't drumming, but seeing him was at the top of my list while I was there.  It was a great night to see great friends. 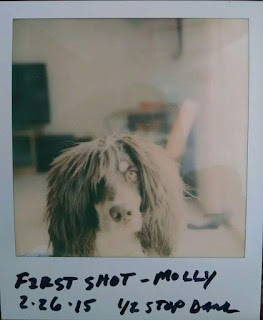